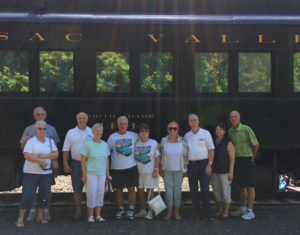 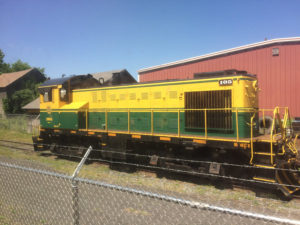 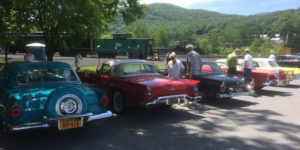 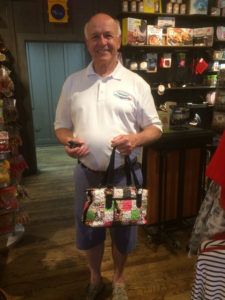 What: Ride to North Adams, MA for a ride on the Hoosac Valley Express

On June 11, 2017 five couples gathered at the Cracker Barrel restaurant in East Greenbush for the “TBirds and Trains” event. Red , yellow, blue and black TBirds drove off to North Adams, Mass. for a ride on the Hoosac Valley Express, a restored rail line. The day started our warm and got warmer (92 eventually) as we wound our way through the lesser traveled roads to the terminal. While buying our tickets we were pleasantly surprised to learn that the rail car was air conditioned. Before boarding, we reviewed the museum’s exhibits. The hour long ride was well narrated with local history combined with the beautiful views of Mt. Greylock and the Hossac Mt. range. Back at the terminal pictures were taken then all proceeded to the Freight Yard Pub for vittles and grog. Unfortunately, some members of the flock were detained by lights and the leaders lost track of them. Happily all Birds returned and a delicious meal was enjoyed by all. Reluctant to leave the enjoyable coolness of the restaurant, we lingered until it was time to head for home. Thanks to Kathy Gibson and Tom Willetts, Al and Gloria Ciejka, Lad and Linda McKenzie and Bill and Karen York for braving the weather and joining the ride. It was also a tribute to the excellent maintenance of their cars that all endured the long distance and heat.